From www.scienceinafrica.co.za which is conducting water usage studies on Jatropha in Africa.

The Jatropha curcas tree, originates from Mexico. It’s oil-producing seeds (30%-35% oil) and entire plant are inedible (toxic) to humans, and most animals and birds. It produces for 50 years.

A small tree or shrub with a maximum height of 5 m, Jatropha curcas reportedly grows readily in areas of low rainfall (from 250 mm a year) and in poor soils, however, yield is strongly affected by growing conditions. The trees are easy to establish (from seeds or cuttings), grow relatively quickly (producing seed after their second year) and are hardy to drought.

There are several concerns around the affect of such a species on the coutry’s already scarce water resources as well as the possible invasive nature of the plant. 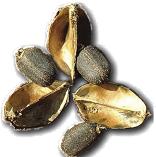 It requires a minimum of 25 inches of rainfall but prefers 69 inches of rainfall. Seed production ranges from about 2 tons per hectare per year to over 12.5t/ha/year, after five years of growth. This range in production may be attributable to the amount of water it receives. See www.jatrophabiodiesel.org .

Maui growers would be competing with India where jatropha workers are paid 19 cents per hour.

The invasive and poisonous nature of this plant would most likely result in bird and animal poisonings on Maui.